Professor Lewin is a Melbourne based, globally recognised leader in Health and Biotechnology. 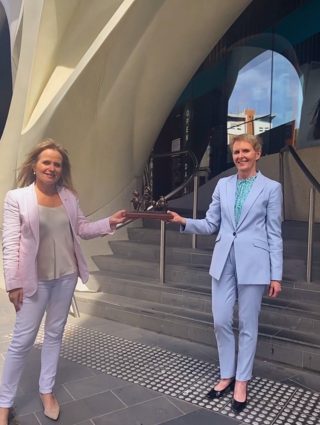 The recipients accepted the Award at the Committee’s Governor’s virtual Round Table E-Room event today, after Her Excellency the Honourable Linda Dessau AC, Governor of Victoria and Committee for Melbourne Patron addressed the Committee’s members with an inspiring oration about Melbourne’s Road to Recovery. Chairman Mr Scott Tanner presented the awards in a virtual ceremony.

Since 1993, Committee for Melbourne annually recognises and celebrates significant and sustained contributions to our city that will leave a lasting legacy through its Melbourne Achiever Award. Previous winners include the late Dame Elizabeth Murdoch AC DBE, the late Ron Walker AC CBE, the National Gallery of Victoria, VicHealth, The Australian Ballet and Peter Clemenger AO.

Committee for Melbourne CEO, Martine Letts applauded Sharon Lewin’s critical role inresponding to the major pandemic threats of our time, including HIV and COVID-19 and her significant contributions to Melbourne’s biomedical sector as inaugural Director of the The Peter Doherty Institute for Infection and Immunity. Sharon has authored over 260 publications and given over 100 major international invited talks on a cure for HIV. Sharon has provided expert commentary and insights for Australians on COVID-19 as a trusted and respected health expert, including on a panel with Dr Anthony Fauci,  Director of the American National Institute of Allergy and Infectious Diseases (NIAID).

“I am delighted and honored to receive the prestigious 2020 Melbourne Achiever’s Award as a very proud Melburnian. Melbourne is a powerhouse for medical research, especially in infectious diseases and immunology. Along with every Victorian who contributed to the COVID-19 response, I am thankful to all our medical research institutes, including the Doherty Institute, who worked together and with government and community to have such an impact on this virus. Getting to zero infections is an extraordinary feat! It’s the collaborative spirit in Melbourne that makes it such a special city to live and work in” said Sharon.

RMIT University was awarded the Melbourne Achiever Award for an outstanding organisation. RMIT is a Melbourne headquartered organisation which has made a significant contribution and commitment to the design, cultural offerings, accessibility, greening, and sustainability of Melbourne as a global city, through its learning and teaching, research and operational activities.  Recent examples include the Melbourne Innovation Districts (MID), New Academic Street (NAS), the RMIT Sustainable Urban Precincts Program and RMIT’s Ngarara Willim Centre

RMIT’s work has had a considerable and positive impact on the Greater Melbourne Future Economy, Infrastructure and Sustainability, Urban Optimisation and Liveability with significant relevance to the Committee’s Melbourne 4.0 agenda.

Martine Letts praised RMIT’s recent Melbourne initiatives and COVID-19 response. “Working with the City of Melbourne, Victorian Government and community organisations, RMIT expanded its financial hardship support for students affected by the pandemic. RMIT also has a direct presence in Vietnam, Singapore, Hong Kong and Europe, supporting our teams and students through this time, and building strong future connections between Victoria and other parts of the world”

“The people of RMIT are passionate about Melbourne and about creating a legacy of education, inclusion and innovation. As a University we’re committed to improving the lived experience of our urban environment and I’m proud that this is evidenced in so many of our projects and initiatives. It’s an honour to be recognised by the Committee for Melbourne.” said RMIT Vice-Chancellor and President Martin Bean CBE.

How E-transport can create a “better normal” for Melbourne

Discover your own back yard