Yarra (spanning Richmond and South Yarra) and the university suburbs of Carlton and Mulgrave all recorded strong take-up of commercial space in 2019, reflecting the eagerness of corporations to follow the talent.

JLL’s latest global study of more than 100 European, American and Asia Pacific cities, Innovation Geographies, ranks Melbourne 10th for talent concentration, reflecting the city’s strong tertiary education sector and population growth. Melbourne is home to seven universities and hosts campuses for five more, accounting for 277,000 students including 91,000 from overseas. The city is predicted to have Australia’s largest workforce by 2046.

Further research by JLL pinpoints six Melbourne suburbs with a rare combination of more than 50% of the workforce between the ages of 20 and 39 and more than 45% of the population with bachelor’s degrees.

In South Yarra and Cremorne, 50.2% of the population holds a bachelor’s degree or higher. This concentration reflects the growth of Cremorne and Abbotsford as technology incubator precincts.

With Melbourne CBD vacancy at a near 30-year low of 3.8% (2Q19), inner suburbs (Fringe) are under pressure to accommodate education and commercial tenants. This has led to a well below average Fringe vacancy rate of just 6.6%.

In Cremorne, formerly the centre of Melbourne’s garment industry, excellent transport links have assisted its evolution to design and tech hub. The Yarra precinct’s net absorption from 2016 to 2019 totals 33,450 square metres and includes high-profile tenants such as REA and carsales.com. Online jobs market Seek will move from St Kilda Road to a new, purpose-built home in Cremorne Street in 2020, absorbing 12,000 square metres.

The University of Melbourne has taken just over 6000 square metres in the northern Fringe office market and are expanding into Melbourne Connect (on the former Carlton site of the Royal Women’s Hospital) in 2022, a new School of Engineering at Fisherman’s Bend (2022) and a transformation of the Southbank campus of the Victorian College of the Arts.

The heat is in Mulgrave, adjacent to Monash University and a precinct for the engineering and pharmaceutical industries. Among the newcomers is Nissan, which has leased 12,000 square metres in Wellington Road, Mulgrave from mid-2020. 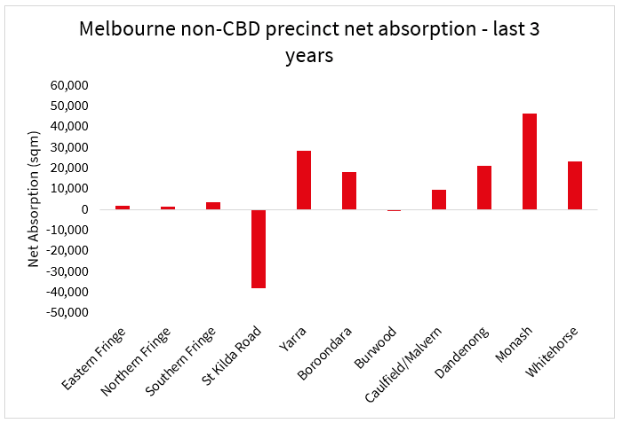 Source: JLL Research 2Q19
JLL Head of Research, Victoria, Annabel McFarlane, said JLL was tracking more than 280,000 square metres of office space in the Yarra precinct alone, reflecting that inner-east area’s concentration of tertiary-educated workers.
“Developers are now looking at that location because of its success as a technology hub,” Ms McFarlane said. “A lot of firms seeking to move into that area want to tap into that young demographic.
“However, in years to come, Mulgrave is going to be our second biggest metro precinct. It is demand-led, and the demand is coming from the big pharmaceutical and engineering companies. A lot have links with Monash University for research projects. And though there is no car manufacturing in Victoria now, the skilled people are still here and the car companies are taking space for sales and marketing.”
JLL Victoria Managing Director David Bowden said the full value of the Monash/Mulgrave precinct would be realised when rail links planned by the State Government came to fruition.
“The precinct’s success now is to do with the established nature of the precinct next to Monash University,” he said. “Monash/Mulgrave has scope to go much further with the right transport links. But it has quietly done very well.”
Ms McFarlane added affordability (compared with Sydney), Melbourne’s universities and clean environment, as well as the Australian system of transparent government, would continue to attract students and employers to Melbourne.
– ends –

Methodology
JLL’s Innovation Geographies study covers over 100 cities globally and tracks a broad range of factors to assess a city’s innovation capacity and the relative strength of its talent pool. Innovation is defined by the level of foreign direct investment in high-tech industries; research and development expenditure; the number of patents awarded and venture capital activity. The strength of a city’s talent pool is determined by its demographics, the quality of its higher education institutions, the proportion of people with a bachelor’s degree and employment in high-tech industries.
Contact: Annabel McFarlane
Phone: 0403 052 672
Email: annabel.macfarlane@ap.jll.com