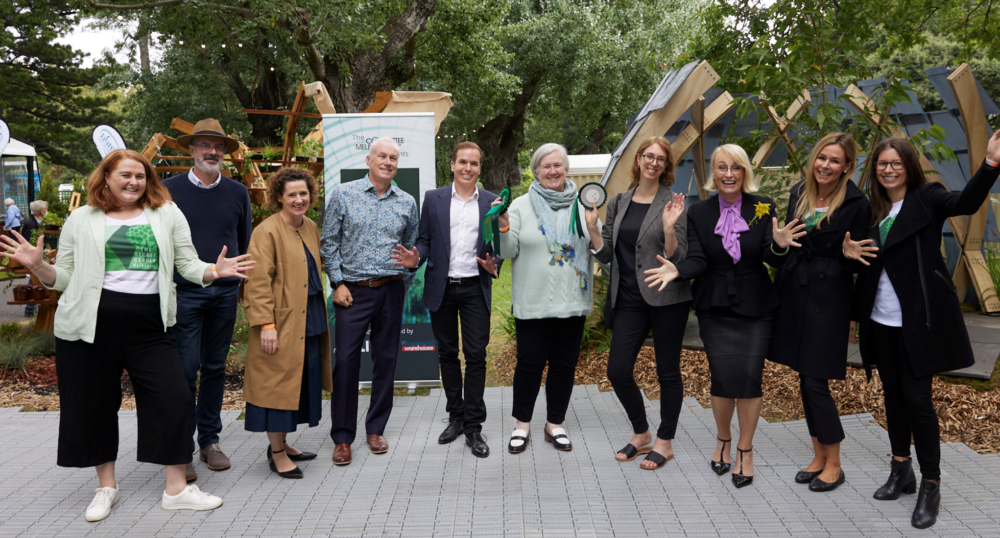 The Secret Garden Melbourne Ideas Competition is a project undertaken by five participants in the Future Focus Group 2021 – 2022 Program. It is an ambitious greening project that engages the community and will transform a ‘grey’ city space into a thriving garden that will surprise and delight Melburnians and support the recovery of our great city. The project has three distinct phases, the first being an Ideas Competition that asked emerging and student designers to consider the north bank of the Yarra River – Birrarung Marr – and present an innovative concept for a Secret Garden.

After a competitive process, three finalists were selected and each given a $5,000 budget to build and display their concept within a 4m x 4m space at the Melbourne International Flower and Garden Show (MIFGS), followed by an onsite presentation to a judging panel. Lord Mayor Sally Capp, renowned landscape architect Jack Merlo, Associate Director Bates Smart Carolyn White, MIFGS representative Martin Semken and the Committee’s Interim CEO Matt Gaffney, were responsible for the competition judging.

Students Francesca Sanguinetti and Jeanette Stoffregen from Monash University won first place with their concept ‘Riparian’. The talented design duo have won the chance to turn their ‘Riparian’ concept into reality later this year in collaboration with Jack Merlo providing an exclusive mentoring experience and the opportunity to positively contribute to the revitalisation of the city. Jack explained that Francesca and Jeanette’s Riparian concept was chosen for its innovative design, functionality and sustainable features, as well as its ability to connect with the community both during the day and at night.

“Each of the finalists presented extremely unique designs that really impressed the judging panel, but there could only be one winner! Congratulations to Francesca and Jeanette on their considered ‘Riparian’ concept that showcased significant attention to the history of the site and was very well presented and executed. I look forward to working with them to deliver their vision later this year,” said Jack Merlo.

With Melbourne’s CBD emerging from the pandemic, Lord Mayor Sally Capp explains that the future Secret Garden Melbourne pop-up will surprise and delight residents, business owners and visitors, helping them feel connected and engaged to the city during its recovery.

“Congratulations to the Committee for Melbourne leadership team. You’ve been focused on turning ideas into outcomes and have delivered something really special with the Secret Garden Melbourne Ideas Competition. We are so excited about this program, which supports and nurtures up and coming talented designers. The ideas presented will help us turn public grey spaces into green areas within our city, addressing issues of sustainability and supporting Melbourne into the future,” said Lord Mayor Sally Capp.

Planning will begin this month for the Secret Garden Melbourne pop-up, with the green space set to open to the public once complete, later in the year.