A Roadmap for Hydrogen’s Future 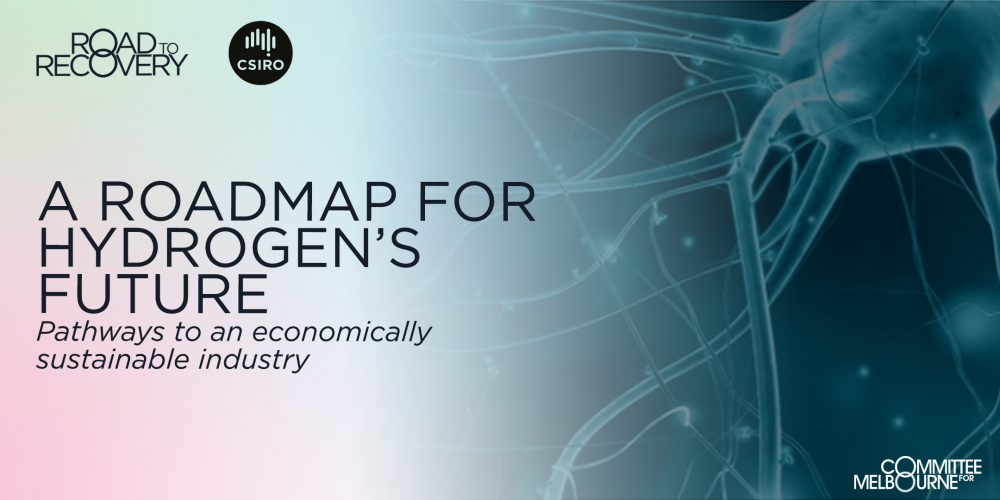 The Committee for Melbourne hosted a member-led forum on 15 September, A Roadmap for Hydrogen’s Future. Moderated by Claire Manson, Chief of Staff for CSIRO’s Future Industries, the session looked at how Australia can take advantage of hydrogen to boost the economy and future technological use. Dr Daniel Roberts, Leader, Hydrogen Energy Systems Future Science Platform at CSIRO Energy provided a presentation on his research and was joined for a panel discussion by Audrey Zibelman, Managing Director and Chief Executive Officer at Australian Energy Market Operator (AEMO) and Richard Bolt, Principal at Nous. The forum generated a lively discussion amongst members and the Committee thanks the speakers for their contributions at the forum.

The key themes discussed at the forum and event recording outlined below.

There is enormous economic and environmental potential for growing the hydrogen industry in Australia. There has been an emergence of a global market for low-carbon hydrogen in countries such as Japan and South Korea. This has meant the creation of new technologies and the steady decline of costs associated with producing and exporting hydrogen. It is estimated that by 2050, the global demand for hydrogen could be ten times that as 2015. Hydrogen can be used as a carrier for energy, and promoting its use goes a long way towards supporting large scale emissions reduction.

There is already a robust framework for the growth of the hydrogen industry in Australia, with a National Hydrogen Strategy agreed to by all states and territories through the COAG Energy Council.

Transport was a common theme from the pre-questions sent in by the audience. The panel spoke about the potential for hydrogen to be used in transport, including in personal vehicles, commercial vehicles and public transport. In the long run, aviation through hydrogen kerosene in jet fuel is a possibility. Vehicles powered by hydrogen fuel cells could compete with those powered by batteries and would significantly reduce the emissions output compared to vehicles run on petrol and diesel.

The panel agreed that vehicles are largely limited by the lack of infrastructure rather than the cost of hydrogen. Further, provided appropriate safety regulations are in place; there is no significant impediment to these vehicles becoming commonplace. Government has a significant role to play in providing for hydrogen-powered vehicles and investing in hydrogen-friendly public transport is a consideration for the future.

The panel agreed that opportunities exist in Australia to produce hydrogen at scale and sell at competitive prices. Exporting hydrogen is a win-win economically and environmentally. This will be important for the economic security of the country, particularly for regions that are vulnerable to the closure of coal-fired power stations.

The panel also agreed that there is a smorgasbord of opportunity for innovation in Australia with a strong research and development sector demonstrating its prowess such as developing technologies that convert methane into hydrogen and graphite.

The panel described how hydrogen could be used to assist in driving emissions down. Australia can help other economies de-carbonise by utilising its wind and solar capabilities to create hydrogen and exporting this. The learnings from this can then be used domestically to understand how hydrogen can be used in our own electricity networks to de-carbonise.

Members of the audience asked about which form of hydrogen is most useful and referred to the ‘colour’ of hydrogen. The panellists agreed that getting bogged down in the detail of how hydrogen is produced and the colour scheme can lead to tunnel vision and the development of hydrogen industry over time will necessarily require the use of hydrogen on a continuum of colour over time.

The panel was of the view that there is still some way to go in enabling a stable regulatory environment around hydrogen in Australia, with the pace of regulatory change not keeping up with the rapid technological growth. Sensibly regulating the sector is important to driving demand and providing for further investment. Additionally, ensuring Government and industry well understand safety standards is an integral part of developing the hydrogen industry in Australia.

For further information on the CSIRO Recovery and Resilience Report, please click here.

If you have any questions that you would like answered, please contact:
Claire Manson, Executive Officer, CSIRO Future Industries