We are pleased to announce the establishment of our first Melbourne 4.0 Taskforce 'Airport link: From concept to construction' to address our first Strategic Need for Melbourne, a mass transit link from Melbourne’s CBD to Tullamarine Airport.

A range of prominent experts from the transport industry have confirmed their participation and will lend their voice to the conversation:

Co-hosted by Committee Members Keolis Downer (Yarra Trams) and Herbert Smith Freehills, the Taskforce will aim to provide the state and federal governments with information to consider when developing the business case for a mass transit link.

As this will be a popular event, we encourage you to register your interest now.

C2 Melbourne is only 85 days away!

Referred to as “a conference unlike any other” by the Harvard Business Review, C2 is the world-renowned innovation conference, co-founded by Cirque du Soleil and Sid Lee, bringing together commerce and creativity to challenge and shape the future of business.

For the first time this year, on 30 November and 1 December, C2 is bringing over 1,500 leaders from 20 different countries and over 24 industries to Melbourne.

Having been voted the most innovative business event two years in a row, the flagship C2 Montreal edition is now in its 7th year and attracts more than 6,000 participants globally. Generating over $142 million in business deals last year, 1 in 4 organisations present made a deal as a result of the event.

To get a sense of what C2 is about, watch this C2 in 1 minute video and check out what Channel 10 News had to say about the event recently at the launch.

As a 'Partner from day 1' Committee for Melbourne Members can take advantage of a special offer: click here and use promo code 'C2MELCFM'.

Launch of our not-for-profit working group

In October we will establish a working group to review the specific needs of the not-for-profit sector in Melbourne, with a particular focus on addressing the future disruption that has been identified through our Melbourne 4.0 work.

With over 25 not-for-profit Members actively participating in our Melbourne 4.0 Taskforce, many issues specific to the not-for-profit sector have already been identified and will be addressed in a series of forums spearheaded by CfM Director Ric Holland and Member Royal Flying Doctor Service CEO Scott Chapman. Issues include: 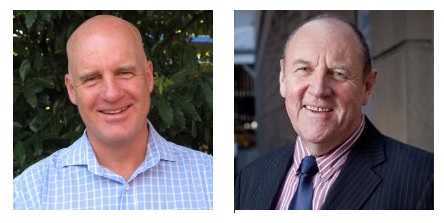 Members of the Committee’s Arts and Culture Roundtable met on Tuesday 5 September, confirming their intentions to:

Kindly hosted by Melbourne and Olympic Parks Trust, participants were provided with an insight into the strategic vision of the organisation responsible for administering Melbourne, and Australia’s, preeminent sports and entertainment precinct.

The 2018-2019 Future Focus Group program which will commence in February with an Induction Weekend is now open for nominations!

An intake of around 30 participants is sought with equal gender representation actively targeted. A transformational experience for the emerging leaders in our Member organisations, the program features 19 evening workshops and active one-on-one mentoring, as well as opportunities to build enduring relationships with other participants and alumni.

Please contact Future Focus Group General Manager Matt Gaffney if you would like to receive a package containing key information and the nomination form.

Expressions of interest are sought by Thursday 28 September. The deadline for submission of completed nomination packages is Friday 20 October.

MEF: do we have the energy to end climate wars?

The recent Finkel Review into the Future Security of the National Electricity Market and Professor John Thwaites, Patricia Faulkner and Terry Mulder's Review Into Victoria’s Gas And Electricity Markets have both raised important questions about the future energy market in Victoria.

As a result, the Melbourne Economic Forum will explore if we have the energy to end the climate wars.

As Committee for Melbourne is a presenting partner, entry is free for the first 50 Members - register.

Taking place in Sydney on 16 and 17 October, CityIGNITE will bring local government, business and technology leaders together with the startup community to find ways of harnessing technology to solve city challenges.

Taking an in depth look at strategies for creating economic prosperity, increasing employment, attracting investment and building resilient communities, this national conference will use the city of Sydney as a living laboratory where best practice will be shared to create positive solutions for our cities.

As a presenting partner for this event, Committee for Melbourne Members can access a 15% discount by using code 'CFM15'. Register.

Happy 163rd birthday Melbourne City Mission!
Last month, Member Melbourne City Mission (MCM) celebrated its 163rd birthday. Our city's oldest charity's story began in the 1850s, when boatloads of immigrants flooded into Melbourne seeking their fortune on the goldfields. While MCM has adapted and changed over time, its goal of working alongside Victorians who are experiencing disadvantage so they can build a better future for themselves, remains unchanged. Read some interesting facts about MCM.

Grant Thornton Australia merger with GNC Group Consulting
Member Grant Thornton Australia’s strategic vision of being growth advisers to mid-size businesses and a leading adviser to the retail sector has been significantly boosted with the recent announcement it has merged with GNC Group Consulting Pty Ltd., a Melbourne-based retail consulting firm with operations in Australia and south-east Asia.

The merger is another important step in Grant Thornton's ongoing strategy to build its growth advisory capabilities to complement its traditional accounting, auditing and taxation work especially as the market experiences the disruption of global heavyweights, such as Amazon. Read more.

The Best Exchange Group P/L has been working closely with both Federal and State Government departments, Trade Commissioners, Chinese Provincial Government bodies and industry representative groups from China, to develop and roll out a unique delegation named ‘SmartCity China'.

You are invited to join this delegation and share it with Smart Leaders from across Victoria such as industry leaders, local government representatives and SmartCity interest groups.

You will gain invaluable knowledge, contacts, insights and opportunities that will help shape the future of a Smarter Victoria.

Led by Committee for Echuca Moama CEO Martin Szakal, the delegation – visiting Shanghai, Nanjing and Ningbo – is aligned with the Victorian Government's Globally Connected Trade Statement and will explore:

As President Xi Jinping consolidates his power, China increasingly presents a confident and assertive face to the wider world.

Join a conversation between Kevin Rudd, founder and CEO of China Matters Linda Jakobson and Executive director of La Trobe Asia Nick Bisley to explore one of the questions certain to determine the shape of the coming century.

Code for Australia is offering Committee for Melbourne Members a 15% discount for their next 'Tech for non-Tech' class on Thursday 28 September.

'Tech for non-Tech' is a program run by Code for Australia designed specifically to help non-technical people deepen their understanding of web development and IT concepts and processes as well as provide an opportunity for all to work with skilled developers.

More information and registration. To access the discount, use code: 'CommitteeforMelbourne'.

‘Economic reform a hopeless cause’ - One of Australia’s leading public servants laments the lack of public appetite for much-needed economic reform.