The Committee for Melbourne warmly congratulates Robert Doyle for his election to the role of Lord Mayor of Melbourne for a record third term. He will no doubt continue to bring a lot of passion and energy to his role. Committee for Melbourne applauds his focus on addressing the homelessness crisis as a key social issue facing our city. We share his concern that this goes to the heart of Melbourne’s liveability and one which we have not yet tackled successfully. Liveability is one of the Committee’s four key policy platforms. We and our members, some of which are assisting homeless people on a daily basis, look forward to working with the City to strive to provide access and opportunity for all in a safe and welcoming environment.

The City of Melbourne has been an engaged Committee member for almost 20 years and is an active contributor to our flagship taskforce, MELBOURNE 4.0. We have invited the Lord Mayor to address our members in early 2017 to discuss his election policies and plans and future vision for Melbourne.

I have been getting out and about addressing numerous community and business forums, including the City of Stonnington’s University of the Third Age, members of the Melbourne Forum, and the inaugural Women’s Circle, a unique professional development and women’s networking initiative offered by Gilbert + Tobin to support the next era of leadership in Australia.
At each forum I was struck by the strong commitment to Melbourne’s future liveability and prosperity in the context of growing housing, transport and employment pressures as a consequence of its rapid expansion. I thank all participants for their creative ideas for how Melbourne can continue to prosper under these challenging circumstances.

We are pleased to report on the continued progress and activities of the MELBOURNE 4.0 taskforce. Following the first workshop, you will be interested to know that the collated member contributions reveal several key trend clusters. We will use this material as the basis for Workshop 2: Framework, Causes and Characteristics, kindly hosted by Corrs Chambers Westgarth on December 6.

Prior to this workshop, you will receive a survey inviting your perspectives about the likely impacts and uncertainty on these trend clusters. The trend clusters will be the main ingredients for our eventual set of scenarios on Melbourne’s future economy.

If you haven’t already engaged with the taskforce and would like to contribute to the development of future scenarios and generate strategic policy options for Melbourne’s future, you can join the taskforce by contacting us at events@melbourne.org.au. You can also contribute through the MELBOURNE 4.0 online tool at melbourne4point0.org.au (contact us for login details).

We value your input and look forward to working with you on this important strategy for Melbourne’s future.

We are pleased to report that completed nomination packages are being received for the 2017-2018 Future Focus Group program. Closing date for nominations is 4pm Monday 7 November.

Interviews with nominees will be conducted by Matt Gaffney, FFG General Manager, at Milton House over the next three weeks with the outcomes of the nomination and assessment process communicated to all nominees on Friday 25 November.

Welcome drinks for confirmed participants in the 2017-2018 FFG program will be from 5.30pm on Thursday 8 December, venue TBA. The Induction Weekend will then kick off at 4pm on Friday 10 February.

Following a submission workshop with members, the Committee successfully submitted a response to Victoria’s Draft 30-year Infrastructure Strategy. Members’ observations were used as the basis for framing the response. We chose to focus on four Needs identified in the strategy relevant to the Committee’s four pillars of Future Economy, Infrastructure, Urban Optimisation, and Liveability. These also align with the MELBOURNE 4.0 objectives.

These were Need 1: Address infrastructure demands in areas with high population growth; Need 5: Provide spaces where communities can come together; Need 10: Meet growing demand for access to economic activity in central Melbourne, and Need 13: Improve the efficiency of freight supply chains.

We greatly appreciate all members who provided input, and in particular those who assisted with editing to improve the accuracy and quality of the submission. Read our submission. 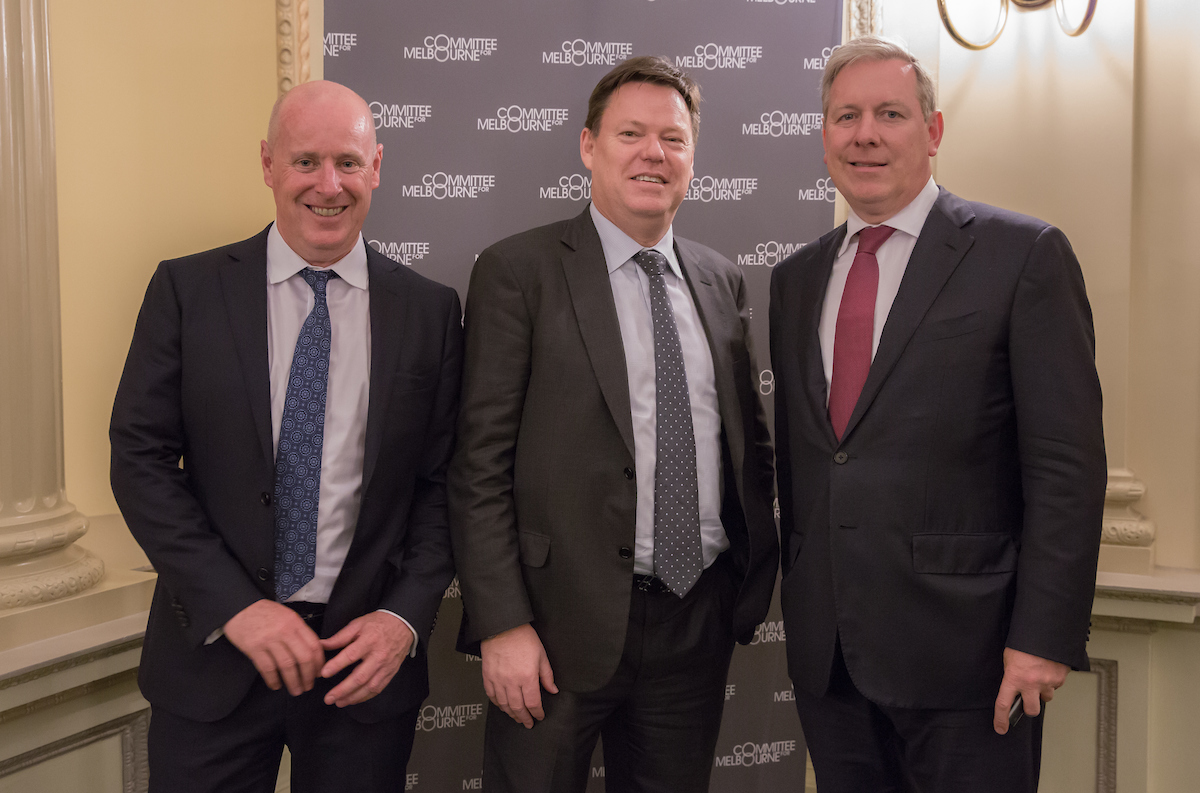 Senior representatives from Foundation member organisations and Members of Parliament from all political parties – including the Hon. Jacinta Allan MP, The Hon. Michael O’Brien and The Hon. David Davis – were welcomed by Mr Khalil Eideh MLC, Deputy President of the Legislative Council. CEO, Martine Letts, highlighted the importance of bringing together Melbourne’s political, business, academic and community expertise in a non-party political setting to contribute to the debate on what our city needs now and in the future.

Members took the opportunity for informal networking and conversation with parliamentarians, making this year’s parliamentary drinks a resounding success.

As part of our continuing Leading Thinker series, Geoff Culbert, CEO General Electric Australia, New Zealand and Papua New Guinea challenged members with the question 'What are we made of? Finding our pioneering spirit to drive innovation'. 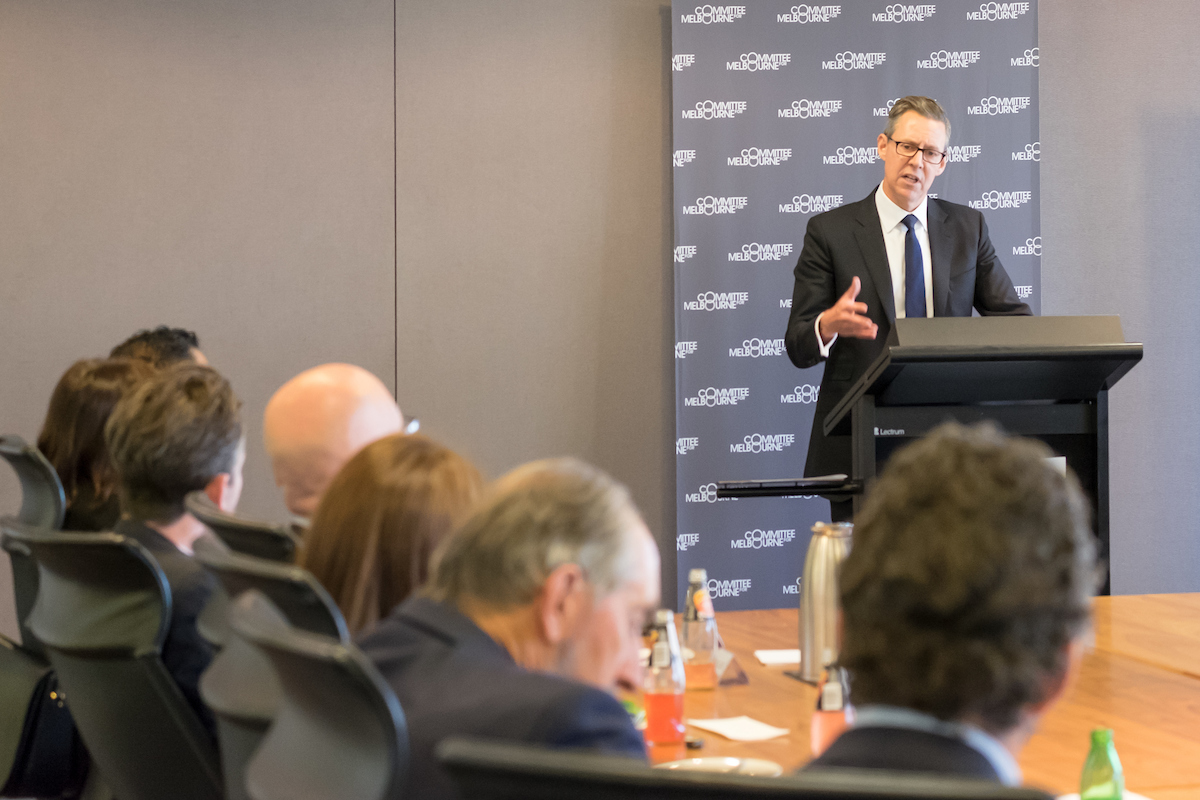 Geoff enlarged on four key themes about how Australia could be at the forefront of global economic competitiveness:

First, we must let leaders lead – Australia has many great leaders but they are held back by negativity and those critical of reform.

Second, speed and agility costs are caught up in layers of bureaucracy that strangle progress making Australia too expensive and too slow.

Third, we need to redefine who the bad guys are – big business is demonised, causing the public to lose faith in large-scale business and entrepreneurs that can expand our global markets and support continued Australian prosperity.

Finally, he urged us to think bigger – Australia needs to be a fierce competitor on the global stage with the same passion and investment it devotes to being a global leader in sport, or progressively diminish in a region hungry for success.

What's on in November for members

11 November – Breakfast with The Hon. Josh Frydenberg MP, Minister for the Environment and Energy, who will address the federal government's plans for Australia’s energy system, with a focus on secure, affordable and sustainable energy; kindly hosted by BHP Billiton

29 November – Leading thinker series: Jennifer Westacott, Chief Executive Business Council of Australia, will talk about how cities must adjust to massive global change currently underway including technological disruption, restructuring of supply chains and the empowerment of consumers. She’ll discuss how these global forces are playing out in Australia, and what cities can do to adapt to the global forces of change; kindly hosted by Nous Group

8 - 9 December – The 4th Annual Women in Leadership Summit, is an interactive forum specially designed for experienced women leaders and aspiring “next-generation” leaders who want to advance their career or grow their business by proactively pursuing their own professional and personal development.

Committee for Melbourne CEO Martine Letts will be moderating a panel titled 'The Road to Success: Adopting a targeted approach in developing your career road map' on Friday 9 December.

Committee members can receive a 10 per cent discount to attend. Email sbigaignon@melbourne.org.au to receive your discount code.

The Cities 4.0 Summit brings together city leaders, business leaders, designers, entrepreneurs and innovators from around the world to find ways to make cities better. It will be an innovation platform for applying ideas to real urban challenges in order to improve quality of life, strengthen economies and protect the environment.

The Committee for Melbourne is a supporting partner of the Cities 4.0 Summit.