Following the recent launch of the MELBOURNE 4.0 Summary Report, planning is underway to address the nine strategic needs which we identified as critical to the future success of our city.

The next phase of the MELBOURNE4.0 Taskforce is to address each strategic need. To do so, we will establish:
A steering group for each strategic need to develop them in more detail, with some matching policy positions
Workshops and forums, facilitated by the Committee for Melbourne, to inform the future debate on these issues
Look out for an email from us inviting you to become involved in the next phase of MELBOURNE 4.0.

In the meantime you can read our MELBOURNE 4.0 summary report or watch our short MELBOURNE 4.0 animation to find out more.
A full report will be available online in the next week.

As part of Melbourne Knowledge Week in May, the City of Melbourne partnered with Yarra Trams and Melbourne Open House to present a panel conversation on the topic of ‘the future city’ and how to maintain Melbourne’s status as one of the world’s most liveable cities.
The panel had a lot of fun circumnavigating the city on the City Circle tram route, using passing landmarks to spark discussion on designing and planning a city for the future. The panel was moderated by City of Melbourne’s Director of City Design and Projects, Rob Adams and was broadcast on ABC Radio National.

I joined fellow panellists Shadow Treasurer Tthe Hon Michael O'Brien; Senator for Victoria Jane Hume and VECCI Deputy President Karyn Sobels  to discuss key features of the Victorian and Federal Budgets and their implications for Melbourne and Victoria. Panellists agreed on the importance of striking a balance between controlling expenditure and investing in city and region building infrastructure and that this presented a continuing challenge.

As reported in our last eNewsletter,The Age covered the launch of the Committee’s MELBOURNE 4.0 Summary Report. Read the article.

The Age has since released a poll in the article asking readers what they think our city needs to stay competitive, based on the 9 strategic needs for Melbourne listed in our report.

It is very interesting to see that most respondents strongly support the need for a direct airport rail link. The Committee advocates for the construction of this link and believes that it will:
Reduce congestion both at the airport and on the freeways leading to and from Melbourne Airport
Improve connections for our international travellers who rightly expect world-class facilities from a global city like Melbourne 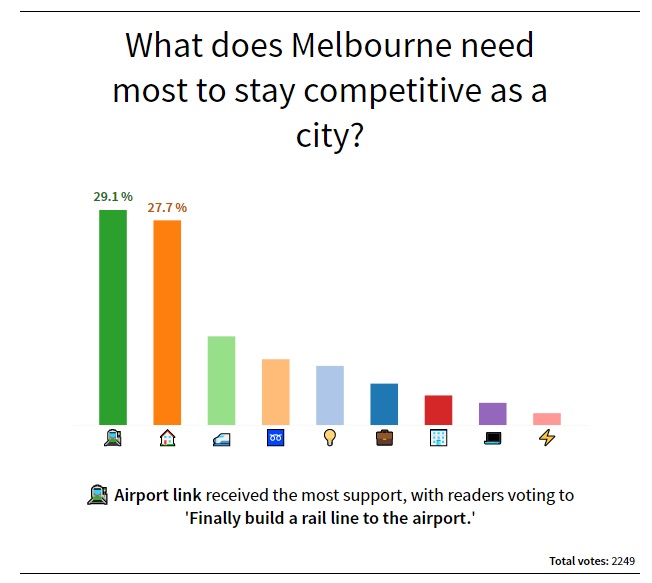 According to The Age readers the top 3 priorities for Melbourne to remain a city of international significance are:
1. The airport rail link
2. Cheaper housing
3. High-speed Melbourne-Sydney train

The lowest score was for Eastern seaboard collaboration.

Destination Melbourne is a  Committee for Melbourne member (2016) whose purpose is to maximise Melbourne’s visitor potential, by championing visitor needs, the visitor experience and the visitor industry.

On 15 June 2017, they are presenting The Melbourne LIVE Tourism Forum a full-day conference bringing the concepts of leadership, innovation and the visitor experience to the fore under the core theme of THINK ABOUT IT.

Participants are invited to THINK ABOUT how Melbourne thrives in the face of economic, environmental and social transformation.

Find out with a stellar line-up of high calibre speakers who are experts in social, environmental, economic and technological sustainability:

The Waste to Energy facility constructed by Yarra Valley Water, is about to open to customers.

The facility is an affordable alternative to commercial organic waste disposal at landfill and has the capacity to process approximately 100 tonnes per day, thereby diverting 33,000 tonnes of commercial food waste from landfill each year.

With the existing sewage treatment plant in Wollert alongside it, the creation of bio-gas is expected to generate enough renewable energy to run both sites with surplus exported to the electricity grid.

Yarra Valley Water Managing Director, Pat McCafferty, said “This plant will not only produce renewable energy but reduces the amount of waste going into landfill...it really is one of those rare projects that delivers multiple benefits in terms of efficiency and looking after the environment”. Find out more

Melbourne will be hosting the ECOCITY World Summit from 12-14 July 2017.

The world’s leading urban policy makers, practitioners and researchers will come together to discuss the sustainability, climate change and resilience challenges facing cities – and the crucial role cities can play in meeting these challenges.

A special offer is available for Committee for Melbourne members to receive 10% off the ticket price (discounts are also available for group bookings) - send an email to redeem.

Don’t miss the opportunity to hear from outstanding keynote speakers including:

In a world first, Melbourne has secured major event C2 Conference becoming the only city in the world outside of Montreal to host the event.

Founded by Cirque du Soleil and Sid Lee in 2011, the C2 Conference brings together creativity and commerce to explore trends, opportunities, disruptions and major shifts on the horizon.

It was reported that in the past six years, C2 alone has created a platform in Montreal that:

A few weeks ago, Committee for Melbourne attended the Melbourne launch. The event highlighted the power of bringing together senior business leaders from a diverse range of industries to come up with solutions to business problems that affect all of us.

Watch the short video below to see what Melbourne will experience November 30 to December 1.

Nutcracker’s sweet as Australian Ballet posts a $4m surplus - We congratulate Committee for Melbourne member (2016) The Australian Ballet for another bumper season with many achievements on and off the stage as it continues its commitment to “care for tradition and dare to be different.” Our city is home to world-class companies like The Australian Ballet which are cementing our reputation as a global leader in arts and culture.

New Office To Boost Gender Equality In Sport: John Eren MP - With record numbers of women and girls signing on to play at grassroots clubs, Minister for Sport, John Eren, announced the establishment of Victoria’s first Office for Women in Sport and Recreation that aims to increase participation and enhance leadership opportunities in sport for females.