The Committee’s Annual Dinner celebrates Melbourne as a thriving, liveable city and provides our members with the opportunity to connect in iconic settings which have included the State Theatre stage and on court at Margaret Court Arena.

Taking place at Melbourne Museum’s Touring Hall on 11 May, the theme of this year’s Annual Dinner is ‘Leading MELBOURNE 4.0’. On the night, we will outline our new strategic agenda for how Melbourne must prepare for the Fourth Industrial Revolution. We will also recognise the achievements of an individual or organisation that has made a lasting contribution to our city with the Melbourne Achiever Award.

Invitations are on their way for what promises to be an evening reflective of our commitment to innovation and the future of our city. If you wish to make an advance booking please email us. Make sure you also join us on social media using #melbourne40.

View photos of past Annual Dinners.

Following the launch of Alibaba’s Australia New Zealand headquarters in Melbourne in early February, Committee for Melbourne CEO Martine Letts wrote an opinion piece published in the Business section of the Herald Sun on 24 March.

She argued that the Chinese e-commerce giant’s move is great news for our city as well as a vote of confidence in our economy, cementing our reputation as Australia’s leading business hub for digital technology.

Echoing the Committee’s MELBOURNE 4.0 Taskforce agenda, she emphasised that we as a city must work together to attract and keep the right people and businesses in Melbourne so we can continue to thrive.

AECOM’s Global Cities Lead Stephen Engblom gave an insightful presentation to our members on lessons Melbourne can learn from other cities grappling with the challenges of growth, complexity and resilience.

Hosted by AECOM on 24 March, Engblom argued that Melbourne confronts similar issues to New York such as:

To overcome these, he highlighted the importance of long-term vision when making decisions about short-term moves. 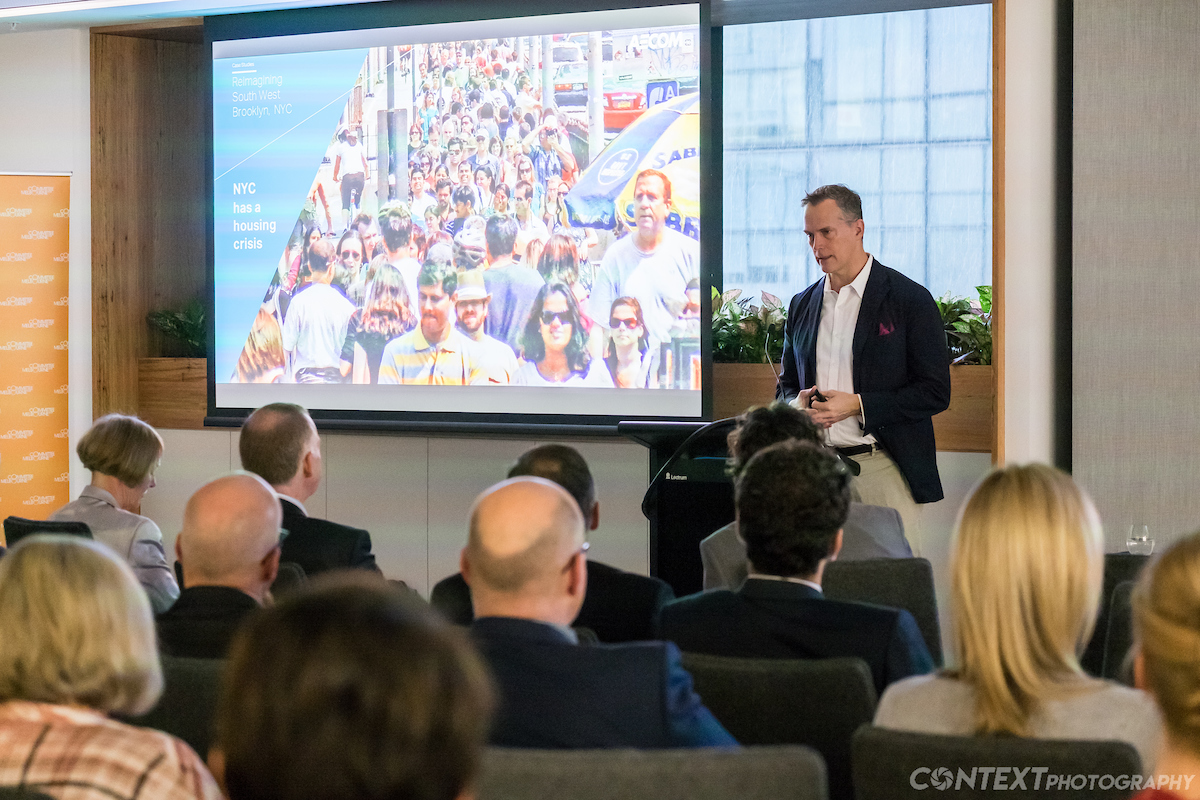 Engblom emphasised that what is required is an evidence-based urban design with a vision to create a platform for interagency discourse. Collaboration between entities, professions and the community is required to achieve sound city development to avoid the pitfalls and longer term damage of a haphazard and piecemeal approach.

View photos from the breakfast.

The challenge is now open and inviting entrepreneurs, technology developers, designers, problem-solvers as well as people from all backgrounds to submit ideas.

The challenge will remain open until June, after which a cross-sector panel of leaders and experts, including Committee for Melbourne Chair Scott Tanner, will choose the winner.

Just like the collective thinking of the Committee’s membership provides us with the catalytic thought required to develop practical initiatives, New York-based agency Citymart is helping cities solve problems through diversity of thinking and open innovation.

On 23 March, CEO Martine Letts participated in a panel discussion, alongside international and national innovative urban thinkers, on how cities can create the framework for innovation as part of the Cities 4.0 Summit.

International city experts applauded the strategic direction of our MELBOURNE 4.0 Taskforce, highlighting the importance of government, industry and community all engaging on agreed priorities and timelines.

The Committee for Sydney hosted the first bi-annual Committees for Cities and Regions meeting for 2017 in Parramatta. The group was able to familiarise itself with one of Australia’s most historic cities, which spans Parramatta’s beginnings from the arrival of the First Fleet in 1788 through to a contemporary, rapidly growing, multicultural city. Highlights included:

Briefings on education and skills development, transport and infrastructure

The Committee for Adelaide was also welcomed as the most recent member of the 'Committees for' network which is an excellent network for sharing experiences, challenges and best practice.

2016-17
Executive Director of the Melbourne Prize, Simon Warrender will be the guest speaker at the next workshop for the 2016-17 cohort next Tuesday, hosted by AusNet Services. FFG alumnus Simon Warrender will discuss his successful project The Magic Pudding, following which he founded and established the Melbourne Prize Trust which the Committee is a founding supporter of.

2017-18
The second workshop for the 2017-18 cohort was kindly hosted by Arts Centre Melbourne last week, with Ben Schramm of Cube Group facilitating a well-received session on ‘ideas to outcomes’. Places Victoria will host the third workshop for this cohort on 26 April, which will feature a collaboration skills development session.

Both the 2016-17 and 2017-18 cohorts have been exploring options on a FFG mentor from beyond their respective organisation, with some well-regarded Melburnians in leadership roles already agreeing to supporting our emerging leaders.

City Square shuts down as work begins on Metro Tunnel – City Square will host the early works for the nine kilometre Melbourne Metro project. A 35 metre shaft will be dug and the site closed for five years to make way for the CBD South station and the tunnel.